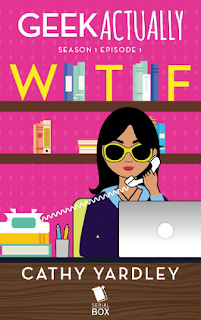 Review copies provided by the publisher.

GEEK ACTUALLY is the first general fiction offering from Serial Box, my favourite purveyor of episodic fiction. Pitched as “SEX AND THE CITY for the modern geek girl,” it follows five diverse women as they navigate life in general and geekdom in specific.

Michelle is an editor at a prestigious SFF publisher. Aditi is a fantasy writer with the potential to become a superstar. Taneesha’s a badass developer at a game company. Christina’s a production assistant on a post-apocalyptic TV show. And Elli is an uber-talented cosplayer with zero interested in life beyond fandom.

Serial Box kindly gave me the first four episodes to preview, and it was all I could do not to tear through them in one go. I had an especially hard time pausing after “The Invisible Woman” so I could write this intro-to-the-series post without letting my thoughts on the subsequent episodes creep in.

Because this is great stuff, people. I’m excited.

With “WTF” (which you can read for free on the Serial Box website), Cathy Yardley introduces the characters and establishes the conflicts that’ll follow them through this first season. Michelle, editor extraordinaire, serves as our door into their world. She’s convinced her publisher to shell out six figures for Aditi’s book--but as much as Michelle believes in the story, she’s having a hell of a time actually working with her friend. Aditi’s got zero interest in doing the promo work that’ll give her a legit shot at stardom, and nothing less than multiple bestseller lists and mountains of buzz will justify the publisher’s investment in her.

Aditi’s ignoring her phone, so Michelle finds her on the #RebelScum Slack channel their friend group uses to keep in touch. The women’s subsequent chat gives the reader an effective glimpse of each character in their own words and through the filter of Michelle’s affection for (and occasional frustration with) them. It’s a great narrative conceit that shows us everything we need to know about how these people operate.

The chat focuses on the Michelle-Aditi professional conflict that anchors the premiere, but and also introduces what looks to be Taneesha’s major storyline. Taneesha’s a black woman in a male-dominated field, and the small game company at which she’s built a good reputation for herself has just been bought up by a bigger fish. All she wants to do is run her project and write some awesome code, but her new bosses bombard her with a bunch of claptrap that diminishes her contributions. I can tell this is gonna create some amazing, all too real narrative tension going forward.

These two storylines (and the characters' fondness for profanity) imbue GEEK ACTUALLY with a much darker tone than I was expecting from something marketed as women’s fiction, but once I adjusted my expectations I was in. It’s clear the writers are out to celebrate how much these women enjoy the geeky things they’ve embraced, be they books or games or costumes, but they don’t shy away from the less joyous parts of being a female fan. 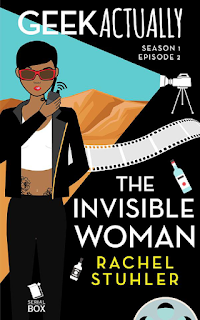 Or being a person, full stop; there’s plenty of professional and romantic drama on the horizon, as writer Rachel Stuhler hammers home in “The Invisible Woman.”

Perhaps because Christina, the Hollywood PA, gets her chance to shine in the opening pages, I soon realized the serial reminds me as much of Jackie Collins as of SATC. There’s a harder edge to to it all. These women don't pull their when they think about their problems, and they're often out and out angry, in true Collinsesque fashion--because, most importantly, their professional lives generate at least as much drama as their various relationships, romantic and otherwise.

In Christina’s case, she works in a tough industry packed with egos, and her latest assignment isn’t the drug-fuelled, sex-drenched cakewalk it first appears. Taneesha’s professional woes also take centre stage this ep as she navigates the politics of her new company and tries to carve out a place where she can do the kind of work she’s most passionate about.

Both storylines are rife with the kind of readerly frustration I eat straight from the jar as each woman finds herself in a situation that should give her the opportunity to live her best life but which soon takes a dire turn. I felt for Taneesha, in particular, and I’m hoping the rest of the season gives her a million chances to shine. I want to see everyone around her recognize her talent and drive.

Meanwhile, Michelle’s business intersects with her personal life at a literary agency’s anniversary party and Elli draws flack from her family due to her utter lack of a professional life. Their storylines are a bit less compelling this episode, but that’s only in comparison to Christina and Taneesha’s meaty doings. I’m excited to see what’s up next for them.

Aditi still has a presence in everyone else’s adventures, but for the most part she gets the second week off; a gloriously cruel way of building tension, given how the reader’s now dying to know what sort of arrangement governs her marriage.

The first ep drew me in, but the second full on hooked me. There’s so much potential for these women’s lives to overflow with all the best kinds of drama; a terrible thing in the real world, but the stuff Collinsesque serials are made of. I’ve got this mental image of myself screaming, “IS IT NEXT WEEK YET?” at the end of every episode.

Speaking of which, I’m gonna dive into episode three now I know it won’t affect how I write about episodes one and two. We'll talk about it soon.