Murchie Plus Books: May 8th to 14th

The premise: I make my cutie-pie dog pose with every book I read. Sometimes I take pity on him and rope in a Special Guest Star so he can have a break.

The photos: go live on Instagram as I edit them and appear here in digest form every Sunday, with descriptive alt tags and additional commentary.

Not pictured: heaps more UNCANNY X-MEN, of course. (I'm not so cruel as to make Murchie pose with every single issue comic I read.) I managed to get the second readthrough post up this week--a small miracle!--and I've got two more drafted and ready for the annoying bits, like finding images and verifying issue numbers.

I also started leupagus's new fic last week and forgot to tell y'all about it. It hasn't hooked me as hard as to the sky without wings (which is still in my Top 4 Things I've Read In 2016), but I'm looking forward to updates. 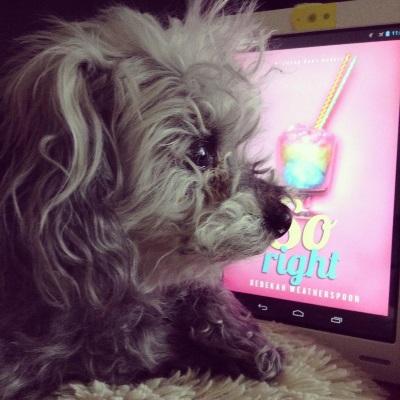 You know, the Scribd changes haven't affected me anything like as much as I expected them to. What with my Raven Cycle reread, my library pile, and the Scribd books-in-progress I've been reading over the last few months, I've accumulated the maximum nine credits you're allowed to let pile up.

I had to spend at least three of those credits by today, and I figured Rebekah Weatherspoon's latest novella was the absolute best way to use the first of them. I shelled out and dove into SO RIGHT, which is a direct sequel to SO SWEET. If you enjoyed that earlier story, you absolutely want to read it. If you haven't read SO SWEET yet, get on that.

SO SWEET was a getting-together book; SO RIGHT is a staying-together book. Weatherspoon tackles the challenges her characters face as they translate their initial attraction into an enduring partnership. There's plenty of emotional resonance, lots of heat, and a fabulous amount of honesty and respect. It all feels down to earth, even though a large part of the plot involves the hero taking ownership of an NBA franchise.

I assume this's the last story focused on Kayla and Michael, but I hope Weatherspoon writes about some of the side characters. I'd love a novella all about Daniella, Kayla's trans business partner. 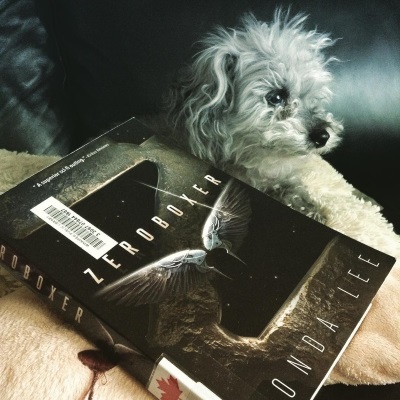 Speaking of my library pile, I requested Fonda Lee's ZEROBOXER immediately after I read her guest post for Women In SF&F Month. I liked what she had to say about gender, and the book sounded right up my alley.

And boy, was it ever. Y'all know I love sports stories, but perhaps I've been coy about my love for marketing and economics. ZEROBOXER brings the two together. It's about a zero-g prizefighter, and there's as much emphasis on building his professional athletic brand as there is on his training regimen. I ate it up.

The cast is ethnically diverse, too, though I wish there'd been some queer characters on the page. SFnal futures sans queer people bum me out. 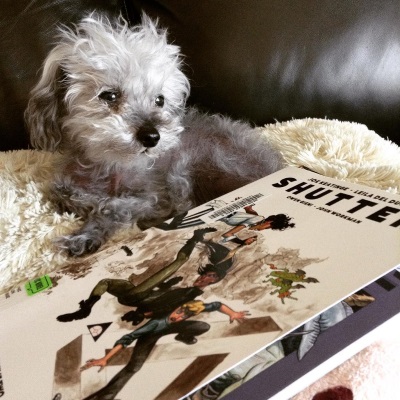 I asked the library to buy the second volume of SHUTTER for me, and they did, and I rejoiced. Then I had to renew it twice because do you think I could make myself sit down with it?

I finally managed it last week, following a reread of volume one. While the first volume didn't hit me quite so hard this time, the series remains really frickin' cool. I'm excited to see where it heads next, provided the library also agrees to buy volume three. 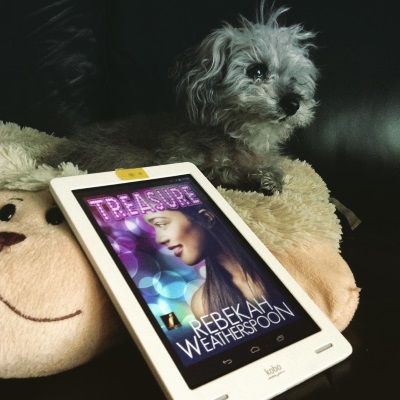 Then I spent another Scribd credit on another Rebekah Weatherspoon novella: TREASURE, a new adult lesbian romance.

It's so sweet, y'all. There's all the usual boundary-respecting one expects from a Weatherspoon romance, but since both the girlfriends are so young there's also a great deal of Figuring Stuff Out. They both know they're lesbians going in, and they both realize they've got something special, but there's still a certain amount of negotiation as they figure out how to respect each other's needs without neglecting their own. Awwwwww. 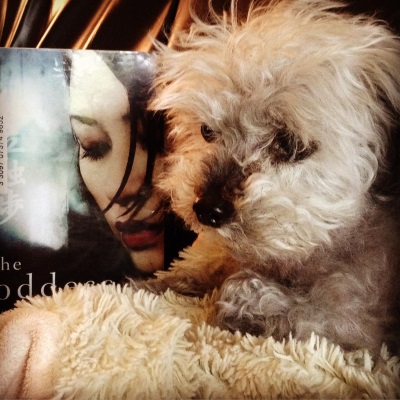 Alas, I failed to click with THE GODDESS CHRONICLE, Japanese crime writer Natsuo Kirino's contribution to the Canongate Myths series. I read about a third of it before I decided it wasn't bad, but I'd rather direct my energies elsewhere.

At least Murchie did that thing where he tries to mimic the cover model's expression. It's not an exact match, but I'll take it. 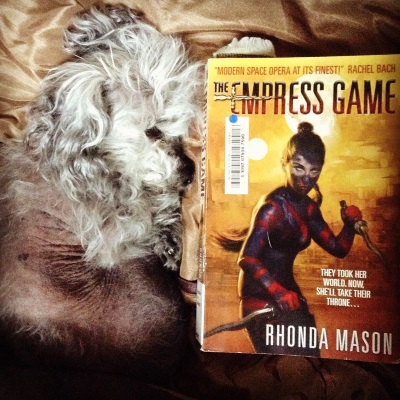 Murchie is such a compact pup. Curled up, he's basically the same size as a trade paperback or a small hardcover.

I borrowed THE EMPRESS GAME, Rhonda Mason's debut novel, sort of on a whim, sort of because it had a Rachel Bach blurb, and sort of because I'd seen it in an ebook sale a couple weeks before and thought, "Hey I've never heard of that. I wonder what it's about?" Then, of course, it took me so long to finish the Raven Cycle that I had zero time for library books, and I assumed I'd have to return it unread.

I figured I should test the waters before I did that, though, so I took a peek and quickly got sucked in. This is fun stuff, friends, filled with baroque worlds, plenty of fight scenes, and psychic siblings. There are heaps of women with concrete goals and powerful political positions, too, and some of them are POC. Hurray!

Again, though, I wish there'd been overt queer people on the page. I read Vid and Trinan as a couple, and there's one genderqueer person in an extremely minor role, but that's it. Sadness. 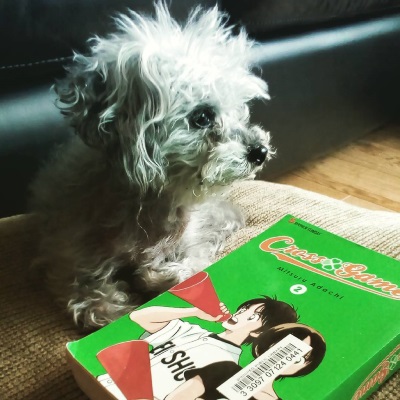 This second CROSS GAME omnibus collects volumes four and five, both of which take place at one baseball game because manga pacing is nothing like western comics pacing.

It's a very good baseball game, but it does go on for a long, long, long time.

It's also very Ko-focused. I'm hoping Aoba gets to play some baseball in the next volume. 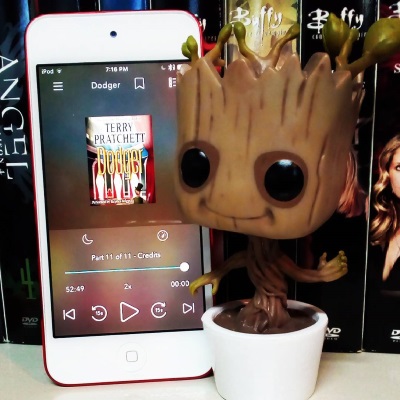 Here are three important things about me:

1. I don't know from Terry Pratchett. It's a terrible, horrible gap in my reading life and I'd be deeply ashamed of it if I were inclined to be ashamed of things like that.

2. I used to think OLIVER TWIST was totally my favourite classic novel, until I actually read it and discovered it's a) boring as fuck and b) steeped in antisemitism. Boring-wise, Dickens literally spends two pages describing peoples' coat buttons, multiple times. Antisemitism-wise, one of his Jewish friends came up to him after the novel's initial publication and said, "Dude, this is not okay," so Dickens went back and toned it the hell down, and that's the version we read today. Which, lemme tell you, is still pretty damned antisemitic.

3. The reason I thought OLIVER TWIST was totally my favourite classic novel is that I love the musical and have always wanted to play the Artful Dodger (who I also used to think was one of my favourite literary characters). I'm too old for it now, alas, so the world will never know the supreme awesomeness that is my rendition of "Consider Yourself."

Maybe I could play Nancy and allow the world to enjoy my version of "Oom-Pah-Pah."

Anyways, Terry Pratchett's DODGER isn't an OLIVER TWIST retelling, but you can see how it might form that earlier story's bones. Dodger is a streetwise young man who helps a young lady escape certain death and thereby draws the attention of one Mr Dickens, who keeps tabs on Dodger's adventures and offers the occasional piece of assistance as Dodger proceeds to unravel the mystery of said young lady's predicament.

We're meant to notice how Dickens uses Dodger's exploits and antecedents as his inspiration for certain bits of OLIVER TWIST, but Pratchett's story differs in two key respects: it's not extremely boring, and nobody is evil simply because they're Jewish.

The latter should, of course, come standard in all stories penned from now until the end of time. The former is an understatement, because what DODGER is is a delight. It's both consciously Victorian and wonderfully modern, with lots of clever wordplay and heaps of Dickens references. (I'm that person who gets excited when someone use's a famous novel's title in conversation, as these characters do early and often.) While my first Terry Pratchett novel, THE COLOUR OF MAGIC, decided me against delving any deeper into his extensively bibliography, this one has convinced me I need to give him more of a go as soon as ever I can.

And hey, let's all thank Dancing Groot for posing with it so Murchie could finally, finally have a break.

Next week: hopefully some review copies. I've got a whole pile of woefully neglected volumes, most of which came out at least a week ago. Argh.

Email ThisBlogThis!Share to TwitterShare to FacebookShare to Pinterest
Labels: murchie plus books