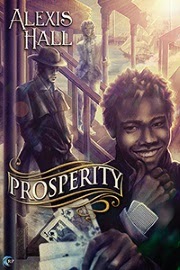 Streetwise Picadilly needs a change, so he stows away on an airship bound for Prosperity, a lawless town strung high above the earth. There, he quickly draws the ire of Milord, a posh thug intent on mining a sky claim for valuable phlogiston--provided he and his associates can dodge the pirates and leviathans that threaten to tear them out of the sky.

Dil isn't too keen to linger in Milord's presence, but he has little choice after he incurs a large debt to Byron Kae, captain of the mining enterprise's aethership. At least serving aboard the ship gives him a chance to get close to Ruben, the gorgeous clergyman who dogs Milord's every step. And even though Ruben proves less seducible than Dil might wish, the aethership itself soon exerts a strong pull over the streetwise young drifter.

Until the leviathans threaten Prosperity itself, and Dil is forced to choose between happiness and heroism.

I first heard about PROSPERITY months and months ago when the editor took to Tumblr to gush about it. Within minutes, it was on my great big list of Books I've Gotta Read. And the moment it hit NetGalley, I hit "request" and crossed my fingers.

It lived up to all my expectations. PROSPERITY is a gem, though it's not necessarily a quick or easy read.

You see, my dears, PROSPERITY is strongly reminiscent of a nineteenth century novel; a fine thing, given that it purports to be just that, but a potential barrier for those of us who occasionally struggle with pre-20th century syntax. While there's action aplenty, it's often eclipsed by a wealth of detail and a strong focus on voice. It's easy to imagine PROSPERITY serialized within the pages of a a late Victorian periodical.

Or it would be if Victorian periodicals had published profanity-laden stories involving airships, cities suspended in the sky, aerial leviathans, and overtly queer folks.

Yes, my friends. Every single character in PROSPERITY is queer, and it's glorious. Dil is either bi or pan, depending on how you look at it. Milord and Ruben are on-again-off-again. Miss Grey, sky monster expert extraordinaire, is a lesbian with a great hankering for whores (and for opium). And Byron Kae is nonbinary.

This delighted the hell out of me.

A further delight: Dil describes his wonderfully queer associates in the most gloriously allusive prose one could possibly wish for. His voice oozes personality as he references everything from ancient mythology to scientific advancements to contemporary (to him) slang. It took me a little while to find the rhythm of it, as is always the case with pseudo-pre-20th century prose, but it was never less than captivating. Its mysteries were a prize to unravel, not a barrier to understanding.

The story itself is great, what with the mix of magic and science, the occasional sexytimes, and the ever-looming threat of the sky monsters, but to my mind the plot takes a backseat to the voice and the characters. You want to read this one for how Dil describes everyone and everything he encounters, more than for what actually happens.

Those characters, friends...! They're fabulous; complex and unexpected, with the perfect blend of competence and fallibility. I enjoyed meeting them very much indeed--even the loathsome ones. Hell, I even got a bit shippy where Dil and Byron Kae were concerned, and y'all know I'm an infrequent shipper at best. Dil spends most of the book making moon eyes at Ruben; I spent most of the book whispering, "...but did you notice how awesome and kind and supportive Byron Kae is? Do you not realize how much you enjoy the time you spend with them? Open your eyes, man!"

I'm coming over all gushy again just thinking about it.

Those of you with any fondness for gloriously allusive prose, alternate history, and fantastic characters must seek this out. Give it a chance to delight you as much as it delighted me.

You'll also wish to know that while the story is self-contained, Hall leaves things open for potential sequels or companion volumes. His website states he's got a short story collection set in this world due for release at some point in the future, and I have my fingers crossed we'll see Dil again in its pages, if not in a full novel or novella.

While I always advocate your local library as the absolute best source for books, I recognize this may not be an option for everyone where every book is concerned. If you're in search of another way to read PROSPERITY, you can try:

I receive a small percentage of the purchase price if you buy the book through The Book Depository or Amazon. I get an extra month of Scribd if you sign up for a two-month free trial.