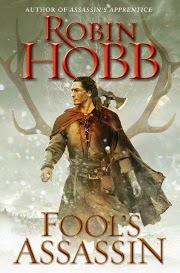 Here it is, friends. The reason I made time to revisit Robin Hobb's Realm of the Elderlings series this year1.

I've tried to wrestle this one into something resembling a proper review since FOOL'S ASSASSIN is a new release and all, but I fear it's still mostly me rambling on about a book I love. There shouldn't be any major spoilers for this particular installment, but we're far enough along now that I've had to at least imply some things about the previous books in the overarching series.

FOOL'S ASSASSIN begins about ten years after the end of FOOL'S FATE and carries us through roughly the next fifteen years. Fitz retreats from Buckkeep politics in favour of life at Withywoods, where he dwells peacefully with Molly. The only true mar on his happiness is how much he misses the Fool.

Until Molly's mind begins to wander in the most alarming way, and Fitz finds himself in sole possession of a most unusual child.

While it's nice to watch Fitz finally being happy about his life, his new position still left me with a bucketful of readerly anxiety. In retreating from Buckkeep, he's also mostly retreated from the connections he rebuilt throughout the previous trilogy. He and Chade are still in frequent contact as Fitz carries on his scholarly work, if not his assassin's role, but we hear very little about the state of things between him and Dutiful, or him and Kettricken, and Thick's role is minimal in the extreme. From the little we do get, it seems as though they've come dangerously close to falling out over Nettle and so have only the most cursory contact now. This, in turn, has distanced him even from the tentative connection he's forged with Nettle, and what appears to be a solid friendship with Riddle.

It broke my heart, though it's entirely in character since Fitz does tend to retreat from things. He isolates himself and ignores any proof that his family loves him. I'm sure Dutiful and Kettricken would put him back to work if he returned to Buckkeep, but I'm equally certain they'd want him there for himself as much as for his particular skill set. Likewise, their refusal to let Nettle marry Riddle is a political choice, not a personal one.

Fitz, of course, ignores this angle in favour of his own interpretation. So far as he's concerned, the only people he can truly rely on are Molly and the Fool. And one of them's aging far faster than Fitz himself, thanks to the healing he endured in THE GOLDEN FOOL, while the other is gone.

Since Molly is the only person he sees as fully available to him, he becomes so heavily invested in what he has with her that he's convinced he'll be entirely alone if she dies. It's hardly a healthy attitude, though their relationship itself is the sort of sweet, supportive thing I very much enjoy.

The timeline involved also saddened me on Fitz's behalf. The book jumps ahead by years at a time; years where the Fool is nowhere to be seen. I became horribly anxious for him as the chapters ticked by with only the most ominous whispers to hint at his whereabouts. I worried about him for his own sake--Hobb is awfully good at making the reader worry about her characters--and I worried about Fitz's reaction to his absence, particularly given his attitude towards the rest of his family.

I should note, now, that the timeline does tend to slow the pace down. This wasn't an issue for me, since I'm the sort of reader who's quite happy to watch beloved characters live their lives and to guess which seemingly minor details are actually crucial bits of foreshadowing (another thing Hobb's frighteningly good at), but I'm sure it has the potential to alienate some folks.

Speaking of alienation, I know of at least one advance reader who found the storyline surrounding Molly's condition too much to bear. It's sad, and it's hard to watch its effect on Fitz and Nettle, but it's occasionally downright bizarre as well. I have a ridiculously high tolerance for WTFery2, but there was a point where I thought it might surpass what even I can handle.

Let me assure you, though: the WTFery has a purpose. It paves the way for some seriously compelling stuff.

Absorbing (and heartbreaking) as the early bits are, the book became unputdownable for me the moment Bee arrived on the scene. She's a mystery that isn't quite, since the reader can't help but realize what's going on with her while Fitz fails to see it. The question becomes not what Bee is but when he'll figure it out--or when Bee will figure it out for him--and what will follow from the inevitable revelation.

Bee and Fitz share the narration from this point onwards, and it delighted me. I always anticipate the moment in any book where two storylines converge, allowing us to see each character through the other's eyes. While that's not quite what's going on here, it's still fascinating to see Fitz from someone else's perspective. Prior to this, we've known only what he chose to record about himself, and what he imagined others had observed when they watched him at work. Y'all know I like him so much in large part because he's an unreliable narrator3, and his unreliability becomes even more apparent once we get Bee's take on him. Some of her differing perspective comes from the fact that he's her parent (hurray! More Fitz-as-parent!), and small children usually view their parents through a particular lens, but just as much stems from Fitz's own assumptions about how others see him being so very, very far from how they actually see him.

It's interesting to note, too, that Fitz himself pauses to address the flaws in his own POV. He wonders how his interpretation of his own adventures has changed with the passing years, and to what extent his past accounts of his life are still fair and valid.

In a similar vein, it's interesting to see how Fitz's interpretation of Bee fails to match her own sense of self. This is the sort of literary trickery that sends me into paroxyms of glee. I do so love to see multiple sides of a character. We also get plenty of fun bits where one of them thinks they've gotten something over on the other--but once we switch to the other POV, we learn they're totally wrong.

This sort of thing delights me.

I must emphasize, too, how very much I liked Bee from the moment she began to tell her own tale4. My feelings for her only intensified as the story progressed. I'm a total sucker for fictional children who actually come across as real people. Bee is intelligent and articulate, but she's still very much a small child. She can absorb a great deal, but she doesn't always interpret it correctly, whether it's an historical treatise she's swiped off Fitz's desk or a conversation she's overheard.

This is most this is most notable where Shun and Lant are concerned. Even from within Bee's POV, it's obvious to the reader that Fitz finds the two bastards Chade asks him to protect deeply frustrating, but Bee, with her child's worldview, assumes he's quite happy to spend time with them instead of with her. She's very like the Fitz of ASSASSIN'S APPRENTICE in this, unable to fully recognize that many of the adults in her life care deeply about her. Not even the ancestral memory of Nighteyes (!!!!) really clues her in5.

Basically, there's as much character-oriented goodness as one could wish for, but those who need more action may be disappointed. FOOL'S ASSASSIN is deeply concerned first with how Fitz's life plays out post-FOOL'S FATE and then with how Bee fits into everything. There are many quiet moments, or scenes where the tension comes not from overt action but from how everyone involved relates to one another.

Hobb also introduces a number of elements left dangling at the end; hardly a surprise, given that this is the first book in a trilogy, but still of potential concern to those who like their series openers to more or less stand alone. Shun and Lant, Fitz's wards6, are particularly dangly as of the last page. We haven't much of an inkling as to what Chade wants Fitz to protect them from, or who their true parents are (though I'd hazard a pretty good guess as to Shun's father's identity, and I'm surprised Fitz doesn't speculate in that direction). They're built up to a fairly large extent, with plenty of hints that Lant in particular is precious to Nettle and Riddle, but nothing comes of it just yet. I hope we'll get answers to these questions eventually, even alongside everything else that's going on, and that they'll prove of some importance7.

Also, and perhaps of more immediate importance, there's a cliffhanger.

But what a cliffhanger it is, my friends!

FOOL'S ASSASSIN rolls merrily along, being fascinating (if you like character-oriented stuff) and anxiety-inducing (if you're as worried about the Fool and his missing messengers as I am), until the last 10%.

The last 10% is soul destroying.

I read it with my hand clamped over my mouth, I was that scared. I read as fast as I dared, certain I could make everything come out all right if I only concentrated hard enough.

I shan't tell you whether any of it worked. No spoilers for you.

Since that's not a possibility for at least a year or so, I'm searching for something to ease the withdrawal symptoms. It's finally sunk in that I've now read all the new-to-me Robi Hobb. That's it. I'm done.

This is a difficult realization.

Maybe I'll reread the Soldier Son Trilogy to help tide me over. And you'd better believe I'll hound every fantasy-reader of my acquaintancee to pick up ASSASSIN'S APPRENTICE, stat8, or to catch up on the series if they've already started. Stories this good deserve to be shared.

While I always advocate your local library as the absolute best source for books, I recognize this may not be an option for everyone where every book is concerned. If you're in search of another way to read FOOL'S ASSASSIN, you can try:

I receive a small percentage of the purchase price if you buy the book through The Book Depository, Amazon, or Audible. I get an extra month of Scribd if you sign up for a two-month free trial.