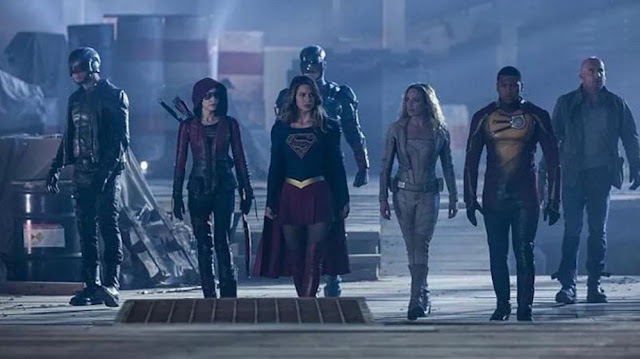 Abandoned warehouse: best place for a superhero team-up or what??

The CW Network loves no setting so much as a warehouse, so I've set out to track every warehouse on every CW show I watch throughout the 2016/2017 TV season. For science.

If you're new to the #warehousewatch project, you can catch up on the October stats here. Remember, for our purposes a warehouse is a large space with a concrete or packed dirt floor, suitable for storage and/or industry. That said, when you watch TV through a warehousey lens, there comes a point where everything looks like a warehouse. It's possible I've mislabelled a few spaces, but I ain't too bothered about it.

A Comprehensive List of Warehouses On the CW, November 2016 to December 2016:

By series, not in order of appearance.

NO TOMORROW, Season One

Eight shows. Thirty-nine episodes, twenty-nine of which feature at least one warehouse. Fifty-two warehouses in total, some of which have become beloved, recurring hang-outs for the characters.

That's a lot of warehouses, though the overall percentage has decreased from 81% in October to 73% in November and early December.

We can blame JANE THE VIRGIN and FREQUENCY for dragging the newtwork's numbers down, though I must note that ARROW failed to maintain its October average of 5.5 distinct warehouses per episode. It went down to an average of 3 per ep, though as previously stated this might have worked to the show's benefit. Maybe ARROW has become too dependant on warehouses?

(On a related note, I personally visited a warehouse on Monday and left without fighting a single ninja. It's almost like ARROW isn't a realistic portrayal of everyday life.)

NO TOMORROW continues to bring the warehouses in spades while simultaneously helping counteract the network's current white pillar candle deficiency. Good job, NO TOMORROW. FREQUENCY had a strong warehouse showing during its early episodes but has since backed away from them in preference to such settings as remote woodlands and peoples' dodgy backyards. One can only imagine they're trying to create a distinct visual brand for themselves, much as THE ORIGINALS encourages its characters to hang around in abandoned churches and aboveground tombs at least as often as abandoned warehouses.

SUPERGIRL surprised and delighted me by introducing a warehouse bar in the BTVS mode. Everyone hangs out there now, and it's awesome. Good work, SUPERGIRL writers.

JANE THE VIRGIN continues to avoid warehouses; a surprising choice, since it's otherwise the most aggressively CWish show on the CW. Given Michael's inability to return to police work, I must assume the show will continue on in this vein. Thank goodness it's still chock full of evil twins, Crime Lord Mothers, random half-siblings, and hoteliers.

Most of the CW's shows are now off the air until mid to late January, when they'll premiere such anticipated offerings as RIVERDALE and the fourth season of THE 100, so join me in early March for a full recap of the warehouses our favourite characters visited throughout the first couple months of 2017!