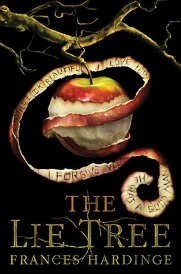 Fourteen-year-old Faith is a gifted natural scientist committed to decoding the world around her--but Faith lives in 1860s England, and girls of her social class aren’t allowed to be anything more than attractive, soft-spoken burdens on their loved ones.

When her family relocates to an island that houses an important archaeological dig, Faith sees her chance to grasp the engaged life she’s always wanted; however, tragedy and Faith’s subsequent discovery of a mysterious plant changes everything. The Lie Tree grants true visions to those who whisper potent lies to it, and Faith is certain she can use it to unravel the mystery of her family’s misfortunes and bolster her own desperate desire for more.

Assuming the lies don’t drag her under before she gets the answers she needs.

THE LIE TREE [Amazon | The Book Depository], Frances Hardinge’s latest offering, received high praise upon its UK publication last year. Now North American audiences can get their hands on it, and I’ve got four reasons you should do just that:

1. You know Frances Hardinge’s never gonna feed you some standard story. Her books are like if Diana Wynne Jones’s books got together with Elizabeth Knox’s books and had a gloriously creepy book-baby to whom they read K.J. Parker in the cradle; which is to say, they’re literate, bizarre, and less concerned with what people should do than with what they actually do. THE LIE TREE inhabits the space between social responsibility and personal accountability, and it never downplays the difficulty of living honestly within a dishonest cultural framework. Hell, it out and out questions whether truth holds as much value as we’d like it to; a bold stance, and one that’s left me inclined to consider this book YA instead of children’s lit, as I’d previously believed all Frances Hardinge’s novels to be.

2. It’s intimately concerned with the limitations placed upon girls and women in Victorian England. Hardinge examines the lies that preserve these limitations, and the lies women tell as they fight to gain and maintain agency in any way their society will let them. It’s both a scathing critique and a compassionate study, all wrapped up in a gripping, deeply personal story. This is never academic to Faith, no matter how she clings to the science of it all. It’s her life and her worldview, and it’s hers to destroy if she can.

3. There is so much science. Faith isn’t willing to accept that the Lie Tree is magic and move right along. She’s determined to discover how and why it works via a process of rigorous, documented scientific enquiry with herself and the island’s occupants as test subjects.

Whether she’s figuring out the Lie Tree’s rules or decoding the social structures that surround her, Faith lives in as scientific a manner as one could wish. She’s eager to discover all the world’s secrets because if she can figure out how it works, maybe she can find a way to turn it to her advantage and life as she wants to live. She faces challenges to her agency early and often, and these wound her horribly without ever breaking her curiosity, her drive, or her commitment to the process.

4. There are lies upon lies upon lies. Hardinge comments upon the very notion of lies by demonstrating how they work in both a real-world and fantastical context. There are the lies Faith tells herself about her family, combined with the lies the men around her wish she would internalize. The lies she tells the islanders as she experiments with the Lie Tree. The lies her father tells to secure his own position as scientist, clergy, and man. The lies her mother lives to protect her fragile place in society.

The jacket that keeps Faith’s little brother from using his left hand is a lie. The funerary photographs the vicar creates are lies. The local doctor’s cranial deductions are lies designed to preserve his own social superiority. It’s impossible to take anything in THE LIE TREE at face value. The reader must constantly consider the speaker’s position within the overall narrative and within the Victorian social system.

I adore books like this. Give me an unreliable narrative to sift through and I’m the happiest person you ever did see.

THE LIE TREE made me pretty durned happy, even as it hurt my soul. It's gorgeous and painful and real and bizarre, and you want to read it as soon as you can.