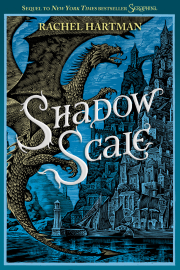 SHADOW SCALE is the sequel to SERAPHINA, Rachel Hartman’s justly lauded debut and the subject of last Thursday’s review. It's also been on my must-read-this-oh-god-oh-god list since the very moment I finished SERAPHINA. I could not wait to devour it.

Wait I did, though, through three full years. A long stretch indeed--but my dears, it was so worth it.

SHADOW SCALE begins about three months after SERAPHINA ends and follows our intrepid hero--that would be Seraphina--on a quest to unite the world’s half-dragons (hereafter, ityasaari) and keep the nation of Goredd from becoming entangled in the draconic civil war that rages to the north. It's a lengthy, difficult task to begin with, and it only grows more perilous when a woman from Seraphina's past sets out to draw the ityasaari into her own twisted schemes.

The resulting story is glorious, painful, and utterly wallowsome. Hartman has crafted the sort of world you want to linger in and populated it with characters you can't help but year to spend time with. I'd happily read nearly anything about Seraphina and her friends (and enemies), and I'd be quite content to explore the Southlands right down to the bedrock.

That said, it took me a surprisingly long time to sink into SHADOW SCALE. I was desperate to begin it the very moment I finished rereading SERAPHINA, but do you think I could manage to concentrate on more than a chapter at at time?

The bulk of this was down to mood--I sometimes pull away from even the best novel-length fiction--but I think Seraphina’s circumstances also played a role. After a recap (which y'all want to read for its evil foreshadowing, even if you finished SERAPHINA mere minutes ago) and a brief stint in Goredd, Seraphina leaves most of her friends behind and embarks upon a journey through potentially hostile territory. It’s a plot-expanding move and a means for Seraphina to develop even further as a person, but it made me realize that a big part of why I love these books so much is that the characters interact in gorgeous ways. I love SERAPHINA for its slow-building, beautifully limned friendships, and I was sad to see many of those treated as a fait accompli from this point on. Seraphina has established strong connections with the rest of the characters; now she lets those friendships simmer while she does her duty to Goredd and to her fellow ityasaari. It’s understandable, and the story demands it, but I was sorry to spend so much time away from Selda1 and Kiggs and Orma nonetheless.

Still, I had Seraphina and Abdo to keep me company, and they're far from stagnant throughout the opening chapters. Seraphina’s journey forces her to reevaluate what she knows of the world, and what role she herself should aim to hold now she’s come clean about her cultural heritage. Hartman never makes it easy for her. Obstacles abound, and they’re all genuinely scary. Seraphina faces a great deal of prejudice, some subtle and some blatant, and none of it is swept under the rug. She’s on a difficult path, and it’ll be years before she can hope for acceptance from even a relative majority of the humans and dragons she hobnobs with. Even some of the ityasaari are reluctant to fully embrace their fellows. Seraphina herself struggles with the horror she feels at certain of her peoples' physical limitations. She refuses to even consider seeking out Pandowdy, the ityasaari who appears in her visions as a large, silver slug, because his physical form disgusts her.

It’s all wonderfully complicated and messy and difficult to sort through, not to mention heartwrenching. Seraphina wants to belong so very, very badly, and her quest forces her to consider the possibility that she never will. Her own people won’t necessarily want her just because of their shared heritage, and the groups she connects with aren’t always the ones she’s able to stay with unless she abandons her duty to Goredd. And, being Seraphina, she's unwilling to back on her promises, no matter what it costs her on a personal level.

Despite this opening segment's complexities, I did find it a bit less engaging than I'd hoped to. The book didn’t fully click for me until Seraphina's journey took her north to Porphyry2. Porphyry is populated largely by people of colour (hurray for diversity!) and is far more accepting of difference than is the south. Many dragons who've been exiled for behavior unbecoming (ie, for having emotions) reside there, and the ityasaari are honoured rather than feared. Porphyrians also ask strangers for their pronouns rather than assuming they're a particular gender, and locals publicly declare their gender when they reach a certain age. If they later realize they misgendered themselves, they adjust their pronouns and gender presentation accordingly with no apparent stigma attached.

This made me ridiculously happy.

Seraphina meets and befriends a transwoman during her time in Porphyry, and Camba’s gender quickly becomes a nonissue for everyone except the villain. I'm beyond thrilled to see transphobia used as a shorthand for villainy. All too often, trans characters are themselves branded as automatically villainous because of that ghastly, must-die-right-now idea that they’re lying to everyone; here, the text clearly casts Jannoula as the one in the wrong when she insists on using Camba's birth name.

Seraphina's sojourn in Porphyry also marks the point where the Jannoula's fell influence kicks into overdrive. Jannoula has the power to manipulate others, either by influencing their actions in subtle ways or by seizing outright control of their bodies--an horrific premise Hartman explores in terrible detail. Seraphina has herself fallen victim to Jannoula's magic, and she lives in constant fear that Jannoula will seize control of her again. Her terror leaps off the page, as oppressive for the reader as it is for Seraphina.

Seraphina's terror is only amplified by her inability to protect her friends against Jannoula. Jannoula hides her true nature behind a friendly, even loving, mask that deceives her victims so thoroughly that she can get her hooks in nearly anyone. She displays little to no empathy for the people she magically manipulates, though her ability to mimic human emotion--and to tweak her victims' reactions--keeps them on her side through all but the most jarring of circumstances. Even when someone manages to break free of her control, she draws them back in with relative ease.

Jannoula is the most chilling sort of villain: the one everyone believes over you, no matter how vilely she behaves.

Despite all this, she's not one-dimensional. Even as Seraphina fears Jannoula and searches for a way to stop her, she’s keenly aware that Jannoula isn’t simply evil by default. She was raised in terrible conditions, tortured and experimented on and isolated from anyone who might have shown her affection. Serahina recognizes how this treatment has warped Jannoula’s psyche, and she feels responsible for her failure to save Jannoula when the other ityasaari first came to her attention.

To my mind, Seraphina's "failure" is entirely understandable. She was a young child when she first met Jannoula, and Jannoula literally tried to take over her life. Seraphina did what she had to do to keep herself and her loved ones safe. Even still, it’s easy to see why she feels so guilty over how Jannoula turns out, and to understand how very much she wishes she could help Jannoula even now.

I really, really love stories where people refuse to give up on each other. Even when I’m of the opinion that the villain’s evil actions render them impossible, or inadvisable, to save.

Seraphina’s probably a better person than I am.

Her strength of character paves the way for an ending that will stay with me for months to come. Oh, how I loved it! I shan’t say too much about it for obvious reasons, but it fits perfectly. It’s fair, but it’s not easy and it’s not free. What's more, Hartman acknowledges that nothing that happens here will immediately erase the Southlands', or Seraphina's, problems. This is a beginning; a place from which the characters can move forward, for good or ill.

Certain elements absolutely broke my heart, while others made me extraordinarily happy.

SHADOW SCALE took me forever to read, but it was totally worth it. This is a fabulous and moving end to Seraphina’s story, and I urge you to read it as soon as you possibly can. Start with SERAPHINA so you get the full effect, and do your best to get a copy of AMY UNBOUNDED as well3. Once you’ve done all that, join me in eagerly awaiting whatever Rachel Hartman comes out with next. It’ll surely be fabulous, whatever form it takes.

While I always advocate your local library as the absolute best source for books, I recognize this may not be an option for everyone where every book is concerned. If you're in search of another way to read SHADOW SCALE, you can try:

I receive a small percentage of the purchase price if you buy the book through Kobo, The Book Depository, Amazon, or Audible. I get an extra month of Scribd if you sign up for a two-month free trial.