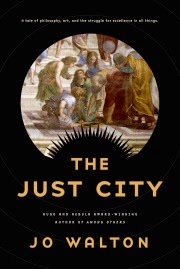 You’re liable to see THE JUST CITY marketed as fantasy, and that’s entirely fair. Divine magic forms the story's backbone as the goddess Pallas Athene pulls philosophers from throughout human history and plunks them down on prehistoric Santorini with instructions to found the Just City from Plato's Republic. The magical setup aside, though, I think THE JUST CITY'S heart is more closely aligned with social science fiction.

A rough summary: Apollo can't fathom how Daphne could have preferred becoming a tree to having sex with him, so he asks his sister Athene to help him figure it out. When Athene's explanation proves beyond his understanding, she suggests a stint in the Just City might help him get a handle on how other people view the world. Apollo agrees, and promptly arranges to be born as a mortal boy and sold to the City’s recruiters so he can experience a full human lifetime within Athene's social experiment.

Apollo, in his human-with-divine-knowledge guise, narrates about a third of the novel. He shares this duty with Simmea, an Egyptian girl brought to the city at the age of eleven as part of the first generation of model citizens, and Maia, a Victorian philosopher who helps conceive of and design the Just City. Their perspectives--interested outsider, native, and architect--combine to give us a portrait of an ideal society that scarcely needs Sokrates’s scathing condemnation to reveal its practical flaws.

Just so's we're all clear on where I'm coming from with this review, I have a degree in Classics but I’ve never read Plato’s Republic. I focused on Civilizations and can tell you heaps of things about the Persian and Peloponnesian wars, plus an ungodly amount about art and architecture and some bonus Fun Facts About Sparta1, but I’m somewhat lacking in philosophical knowledge. The Languages students studied Plato and all them; we Civilizations folks stuck to Herodotus and his ilk2.

What I’m saying is, I Do Not Know My Stuff where Plato is concerned--and while I’m sure THE JUST CITY is more intellectually exciting if you’re well versed in Plato, I’m here to tell you you don’t need to be. Enter with a willingness to engage with the ideas you find herein, coupled with an enthusiasm for philosophy, and you’ll do just fine.

Really: you need to be enthusiastic about philosophy, or at least willing to become so, because THE JUST CITY is just as much an experiment as the Just City it describes. It exists as a venue for the reader to explore these philosophical ideas alongside the characters, with a strong emphasis on the philosophy of choice. The reader chooses to engage with the text and to interpret it as she sees fit, but most of the characters have been thrust into this arena with no choice whatsoever.

Walton explores choice throughout an abundance of vehicles, but the two that stand out are rape and slavery. Apollo enters the Just City because he doesn’t understand rape. He can’t fathom how someone he wants to have sex with could possibly fail to feel the same way about him. Why can’t his choice stand for both parties?

Ikaros, Maia’s former friend, takes a similar view. He can’t understand how Maia can choose not to sleep with him even though he’s provoked a physical response from her. To his mind, her strong verbal refusal is invalid in light of what he wants and what he thinks she must want. It’s a setup any right-thinking reader can’t help but find horrifying. Neither man recognizes that their choices are not paramount; that they cannot choose something on another person's behalf.

Apollo engages with this idea. Ikaros never does.

The children’s situation parallels the sexual violence. The masters have chosen to make the Just City their home and their life’s work, but every child arrives there as a slave. They’re purchased from markets around the Mediterranean and are not permitted to leave the Just City once they’ve entered its confines. Those who run away are allowed one transgression before they’re punished. There are no appeals. If you’re brought to the Just City, you will live in the Just City.

The Just City is good for you. You’re given space to grow and change and become your best self. How could you possibly dislike this? You’re clearly mistaken as to what you want. Get back to your studies.

Simmea doesn’t need to be persuaded. She loves the Just City right off the bat and quickly commits herself to the ideals the masters espouse. She’s determined to be a good citizen, to strive for personal excellence, and to help the rest of the children become their best selves. Her friend Kebes, on the other hand, refuses to accept anything he’s told. He questions everything the masters do or say, right from his initial purchase on down. And, just like Apollo and Ikaros, he can’t understand how Simmea's choices can differ from his own; how she can embrace the life she’s been pressed into, and how she can fail to desire him on a physical level.

Even though Simmea's appreciative eyes provide us with our most in-depth look at the Just City, I found much about the place horrific. On paper, the masters' plans for equality of the sexes, higher learning, and personal betterment seem wonderful, but in practice the bad eclipses the good. The lack of choice becomes more and more pronounced as a class system emerges, constructed by the masters to fill quotas and maintain mathematical beauty more than to acknowledge the children’s current strengths and any talents that might emerge as they age.

It's also telling that the masters continue to call their younger citizens "children" even after they've reached the age at which they receive these adult assignments.

By the time this class system officially comes into the effect, the City's flaws have snowballed. From the first, censors maintain strict control over the literature and art to which the children are exposed. Anything deemed inappropriate is either barred from the Just City or kept for the masters’ private use. This includes Plato himself. The children may read the Republic when they turn fifty; prior to that, they’re dependent on what the masters tell them. And you can bet the masters leave things out.

The masters grant themselves access to birth control, but the children are forced to mate with partners of the masters’ choice at regular intervals once they turn seventeen. (Hello, eugenics!) No one can abstain, regardless of such issues as sexuality or dislike for their assigned mate. Neither can they raise, or even identify, their own children. And even though there's supposed to be equality of the sexes on every level, the patriarchy still has a firm grip on masters and children alike, as exemplified by characters like Ikaros and Kebes.

From class to education to sexual choice, the Just City is in no way a free and equal society. The robotic workers who may very well be acquiring sentience, and whom no one really wants to think about until Sokrates forces them to do so, underscore this point. Slavery runs through the Just City’s very bones, and there can be no consent within slavery. Not in any sense.

I’d go so far as to say the Just City is a dystopia couched as a utopia. Sokrates, who is brought to the city late because the masters worry he'll "corrupt" the children, immediately recognizes it as such and sets out to topple the whole damned thing.

Soon as he shows up, the book goes from philosophically interesting to downright exciting.

I spent the whole of THE JUST CITY complete engaged and fascinated. It’s the sort of book that demands you think about it in great detail, both as you read it and for days--nay, weeks--afterward. Walton raises enough questions to populate a hefty volume's worth of detailed essays on the city, its inhabitants, and the philosophical issues that drive them.

Like, I’m at 2,500 words here (albeit counting the footnotes, which have little to do with the actual text), and I haven’t yet touched on certain key aspects of the story, like the friendship between Pythias (Apollo’s mortal identity) and Simmea. Their relationship is a complex, adult look at how love works when desire is one-sided but affection isn’t. Neither one of them allows their to emotions run rampant. They approach what’s between them as something they wish to nurture and explore, regardless of the form it takes.

But even still, shades of the wider world creep in. Apollo recognizes that he isn’t physically attracted to Simmea, and he’s come to realize just how wrong he was about his former notions of choice, but he’s still horribly jealous of the boys she sleeps with during the mating festivals. Seventeen years of human experience isn’t enough to overcome thousands of years of conditioning, even when one engages in frank, philosophically-dictated examinations of one’s thoughts and feelings. Apollo is a product of his environment, and he really has to work at negating its effects on his behavior.

Moving along to the ending: I was initially conflicted about it, but the more I mull it over, the more I like it. As I said above, the book is as much a thought experiment as the Just City itself. There can be no concrete answers to any of the questions Walton raises, though I’m living proof that some readers, at least, can’t help but reach for them anyways. The only way one could possibly end such a narrative is with a choice--and that choice belongs as much to the reader as to the characters. There are people for whom the Just City is and always will be their choice (provided they're free to make it, which I would argue they're not while they're to all intents and purposes enslaved), while others may choose to reject it. And the reader herself must choose how to interpret Sokrates’ final debate with Athene and its impact on the Just City.

...then again, I mulled all this over before I realized a sequel was forthcoming. THE PHILOSOPHER KINGS picks up twelve years after the end of THE JUST CITY and will be available at the end of June (just in time for my birthday. How fortuitous!). THE JUST CITY's ending takes on a somewhat different shape when you realize it’s not actually an ending. I can't wait to see what happens next, and to mull it over for hours on end.

While I always advocate your local library as the absolute best source for books, I recognize this may not be an option for everyone where every book is concerned. If you're in search of another way to read THE JUST CITY, you can try: