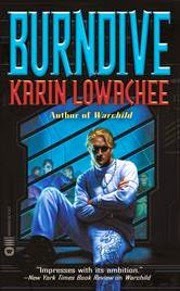 I couldn’t read another book after WARCHILD. I just couldn’t. I futzed around for a couple of days, poking at comics and short fiction as I waited for a chance to visit my local used bookstore in search of more by Karin Lowachee.

Thankfully, BURNDIVE was waiting for me. I don’t even know what I’d have done otherwise. Probably moped around for the next few months, disconsolate and inclined towards long, loud complaints about the state of the world.

I get a touch dramatic about fiction.

BURNDIVE is a very different book from WARCHILD, so I worked hard to temper my expectations (which were all tangled up anyways, since I’m the kind of reader who always fears any and all follow-ups to a beloved book.) It took me about a hundred pages to get used to the different approach and the wildly different main character, but once I settled in I was hooked but good.

This second volume relocates the action to Austro Station, where Ryan Azarcon lives the privileged life of a rich university dropout. He’s got his drugs when he can sneak them past his bodyguard, his parties when his mother lets him out of the apartment, and no responsibilities to speak of. In the absence of any better activity, he spends his days playing his guitar and trying to escape the shadow of the terrorist attack he witnessed during his last months on Earth.

His shiftless life becomes anything but when major news comes in from the far reaches of space: his father, captain of the warship Macdedon, is in peace talks with the aliens against whom he’s waged war for as long as Ryan can remember. And the fallout lands squarely at Ryan’s feet.

Okay. Let’s began with the ways BURNDIVE differs from WARCHILD, since I know that’s liable to be a prime concern for those of you who took my advice and read the first book.

The biggest immediate difference is that BURNDIVE begins in the third person with a fair amount of description. Ryan’s life isn’t in as much immediate danger as Jos’s, so his story can take some time to build steam. Through his eyes, we learn quite a bit more about what civilian life is like in Lowachee’s future galaxy; how the stationers behave amongst themselves when they needn’t fear imminent attack, and what they consider to be important on a galactic scale. We also hear about Earth, from which Ryan has recently returned after three years at an American university and extensive travels around the rest of the world. It’s a nice exercise in world (galaxy?) expansion if you like that sort of thing, which I do.

Immediate difference the second: there’s little danger of the reader confusing Ryan with Jos. Even though he’s physically older at 19, he’s much younger in an emotional sense. Ryan has led a privileged life, even considering that his father has been absent for most of it. His grandparents love him and his bodyguard clearly cares about him very much. He’s received plenty of educational opportunities and a living environment that allows him to goof off with impunity. There are few consequences for his actions, no matter how badly he mucks up. His behavior and his attitude towards those around him reflect this.

To be blunt, he comes across as a brat, though Lowachee is too good to leave this assumption unexamined. It’s clear Ryan is a product of his upbringing, not a deliberately callous person, and as we learn more about what he’s been through we see how much of his behavior is his way of fighting the trauma he’s endured.

Which brings us to our first and most important similarity between the two books. Ryan’s trauma receives no less narrative attention than Jos’s did. Lowachee never downplays the reality of Ryan’s pain or draws unfair comparisons. His experience isn’t the most terrible thing that’s ever happened to anyone, but that doesn’t mean it isn’t still a wretched, awful thing that has changed his entire world. Lowachee gives him space to deal with what happened to him. He works through his pain even as he realizes what’s going on with his family, with his galaxy, and with his own future.

In line with this choice bit of character development, Lowachee does more fabulous things with POV. The book begins in third person, but it doesn’t stay that way forever. The Ryan we first meet isn’t capable of speaking for himself. He’s both sheltered from the world and deeply hurt by what he’s witnessed, and he has yet to discover the words he needs to express what’s inside him. When he finds his voice, the novel shifts into first person. It’s gorgeously done and deeply affecting.

Karin Lowachee is the queen of important POV choices. She really, really is.

Ryan’s personal struggles also feed into the wider plot. Captain Azarcon and his crew are trying to forge a new era, and the text acknowledges just how difficult that’s bound to be. There are a lot of prejudices to overcome before the peace talks can have any hope of success, as exemplified by Ryan himself. His view of the situation is heavily influenced by the media, pop culture, and the human-centric environment where he grew up. Much of the narrative tension comes from his slow realization that he doesn't know the whole story, even as Lowachee ramps things up with plenty of overt action and many a political manoeuvre.

The last hundred-odd pages are so intense I had no choice but to binge-read. There are a few missteps here and there--one seemingly terrible thing turns out to be easily fixable, and burndiving (basically, hacking) doesn’t play nearly as large a role as the title would lead one to believe--but for the most part the ending left me desperately engaged and in need of more, more, more. Ryan himself gets a satisfying and self-contained character arc, but the wider story is far from over.

I needed CAGEBIRD immediately--but the paperback was insanely expensive for some reason, and there was no e-book edition, so I had to wait more than a month for a used copy1. The wait was damned near interminable, but my lovely mother tracked one down on her yearly trip to Victoria, BC (land of used bookstores), and I'm reading it right now, as we speak. More on that in a few weeks.

In case you can’t tell, I’m utterly in love with Karin Lowachee’s books. Y’all need to read them, please and thanks. Just remember this one starts a bit slow and is pretty durned different from WARCHILD.

Oh! Since I know you’re curious: BURNDIVE gives the reader a chance to catch up with some of the characters from WARCHILD, even though this isn’t their story anymore. As I mentioned when I reviewed WARCHILD, a big part of me never wanted to see Jos again so I could pretend his life got super-duper awesome, but it turns out I was glad to see him (and some of Macedon's other crew) again in BURNDIVE. I now hope he plays a role in CAGEBIRD, too, since updates on beloved characters are always welcome. Even when you think you don’t want them.

Also! Diversity notes! Ryan is half Chinese decent on his mother's side, and I read him as bisexual but heteroromantic. He's quite willing to head into designated make out rooms with dudes, but he seems to focus on women when it comes to romantic relationships. Thought you'd want to know.

While I always advocate your local library as the absolute best source for books, I recognize this may not be an option for everyone where every book is concerned. If you're in search of another way to read BURNDIVE, you can try: