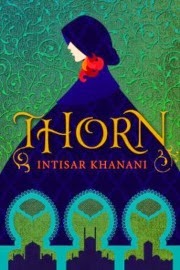 Review copy provided by the author.

Princess Alyrra has always been a pariah in her mother's court, tormented by her elder brother and despised by his nobles. When her mother marries her off to the crown prince of a neighboring country, Alyrra assumes she's doomed to a short, bitter life away from even the few comforts she enjoys on her home turf.

Everything changes, though, when she falls victim to an identity-switching spell on the way to her intended husband's court. Magically barred from speaking of the curse, Alyrra finds herself relegated to the lowly role of goose girl--and endowed with a freedom she has never more than dreamed of. But as she grows increasingly aware of the dark sorcery that plagues her new land, and comes to know the man who would have been her fiance, she faces a choice: keep her head down and survive, or risk everything and perhaps save the kingdom.

I knew I had to read THORN as soon as I saw Ana's reading notes, so I was thrilled when Intisar Khanani reached out to offer me a review copy. I read it straight off, loved it, and have spent the intervening weeks recommending it to anyone who so much as hints they'd like a fairy tale retelling.

Speaking of which: are you into fairy tale retellings? Want to read a version of "The Goose Girl?" Then ooh boy, have I ever got the book for you.

Khanani is the sort of author who begins with far more questions than answers, so it did take me a little while to sink into her prose. Both the worldbuilding and the character development proceed slowly, each small piece setting the stage for greater understanding down the line. This requires some patience on the reader's part as we're expected to keep up, and to trust that the answers we eventually get will be worth the wait.

And they are. Alyrra is a fascinating character, as much for what she conceals as for what she shares with the reader. The abuse she suffered at her brother's hands has left an indelible mark on her. She doesn't believe anyone could possibly have her best interests at heart, or mean what they say, because she's grown up steeped in mistrust and betrayal. She instinctively expects to be hurt, and she raises barriers to prevent anyone from getting close enough to do so.

Khanani does a masterful job of showing just how these barriers impact Alyrra's relationships with everyone she encounters, and how difficult it is for her to lower them even in the face of support and affection. The friendships and alliances that emerge as she oh-so-slowly connects with the people around her are beautifully developed.

Alyrra forms her first and most enduring bond with Falada, a strong-willed (and, unbeknownst to everyone else, talking) horse her brother inflicts on her as yet another torment but who becomes her strongest ally. Falada continually challenges and supports Alyrra, acknowledging both what she currently needs and what she's liable to require in the future. Their friendship is equal parts joy and pain--most particularly for the reader who knows the fairy tale at the story's heart.

Alyrra also becomes friends with the commoners who work in the stables. Though she's initially reluctant to trust in them, she eventually comes to regard them as family, and to feel their hurts as her own. They give her a valuable window onto another segment of society and force her to engage with the injustices her new country faces.

The same is true of the people who fight for change on a street level. The sharp contrast between the "justice" they receive and what the nobles experience gives Alyrra another motivation to help the country she was once supposed to help rule. It also introduces a welcome political component to the tale; an acknowledgement that fairy tale lands aren't simply home to upper class folks with their elaborate hunts and decadent parties. Dire things happen outside the castle walls, and while the commoners take matters into their own hands, they could use a champion amongst the upper echelons of society. A champion like Alyrra, perhaps.

But even as her characters call for change, Khanani acknowledges that lasting alterations to any political structure take time to build and maintain. There are no magic solutions for complicated problems. If Alyrra wants to change anything, either for herself or for the people she comes to care about, she'll have to fight for it.

Of course, Alyrra also interacts with Prince Kestrin, her intended husband--and even though the reader must guess they'll end up married, their story isn't so much a romance as a quest for mutual understanding. It's immediately apparent to the reader that Kestrin realizes Alyrra has been cursed, even if he's not entirely sure of the spell's nature, but it makes sense that wary, distrustful Alyrra shies away from accepting his desire to help. We see Kestrin's side of the story in tantalizing flashes of insight as he tries not so much to save Alyrra as to help her navigate the curse's twisting pathways for herself.

There's always an understanding that this isn't love--can't be love, given how little they've actually shared of themselves with one another--but it might become love somewhere down the line, should both parties be willing to work at it. I love that.

On another note, I'd be remiss if I didn't mention the magic at the heart of the tale. Khanani weaves it into this world in such a way that it feels both firmly rooted and elusive. It's not exactly commonplace, seeing as how there are such intense strictures on who can practice it that even the royal family is barred, but the magic that forces its way into Alyrra's life feels entirely organic and suitably effortful. It sometimes follows fairy tale logic, as one might expect in a fairy tale adaptation, but it fits. Its pathways are difficult, convoluted, and satisfyingly tricky to navigate. And, as I hinted above, Alyrra holds the power to unravel her own curse. She's victimized, but she can break free of what's been done to her and forge a new life for herself.

Oh, friends, the whole thing is just so wonderful! I recommend it to the lot of you, but most particularly to anyone with a hankering for a character-driven fairy tale retelling.

Me, I look forward to reading more from Intisar Khanani as soon as I get la TBR just a little bit smaller.

While I always advocate your local library as the absolute best source for books, I recognize this may not be an option for everyone where every book is concerned, especially with an indie title like this one. If you're in search of another way to read THORN, you can try:

I receive a small percentage of the purchase price if you buy the book through The Book Depository or Amazon.