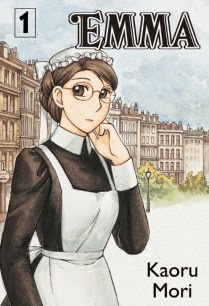 This review covers volumes one through seven.

Emma, a lovely maid, is inundated with prospective suitors, but no one catches her eye until she meets William Jones, the young scion of a wealthy family. Their mutual attraction is instantaneous, and it only grows deeper as they come to know one another. Forces are aligned against them, though, and the lovers must choose between the dictates of society and the pull of their own hearts.

Ah, the joys of class-straddling historical romance! EMMA is absolutely gorgeous on every level, my friends. Do yourself a favour: seek it out and devour it.

If you'd like some justification for this course of action, read on.

Kaoru Mori has a profound talent for illuminating the small, telling moments in her characters' lives. Dialogue often takes a back seat to body language and the sense of movement imparted by panels that flow organically into one another. We live each emotion alongside the characters, taking each beat as they process their often complicated feelings.

The results are beautiful, uplifting, and often heartbreaking. It helps that Mori's work is meticulously researched and drawn with a keen eye for the period. The comic embodies Victorian England in every way, from its dense cityscapes to the many interior scenes rife with the sort of tiny details that make the world come alive. No element is too small to be important. Every piece contributes to our sense of the whole.

Her character designs, too, are elegant and in perfect sync with one another. Each member of the Jones family is visibly related to all the others; each maid in Emma's world is as distinct as one could wish, despite their identical uniforms.

And hey, if you're into nudes, Mori has you covered. She doesn't trot them out too often--this is Victorian England, after all--but the bath scenes are lovingly rendered and sure to delight readers who enjoy that sort of thing.

*coughcoughcough* Moving on to the actual story, there's a hefty emphasis on how the class divide affects the characters. Emma, our titular protagonist, comes from the very lowest of circumstances: she's an unwanted country girl who's kidnapped and brought to London by men who hope to sell her. She's lucky enough to escape, and to eventually find work with a retired governess who teaches her to be a maid. She's managed to change her status once already, jumping from street child to someone with valuable skills. This positions her as someone who's definitely lower class, but who has the potential to learn enough that she could rise higher.

William, in contrast, comes from a merchant family with a mansion and vast resources. While he's wealthy and well-regarded, though, his father has fought hard for the family's current status. Mr. Jones is all too familiar with the cruelties London society inflicts on those they deem unworthy, and he's more than proud to have escaped his roots and become an accepted member of the upper class. In a sense, he's a male Emma--and, having climbed so high, he is ever conscious that his children must continue to rise via good marriages. Anything less throws not only their individual standing but the entire family's social position into question.

Auralia, William's mother, also has the potential to parallel Emma in several ways. She's obviously from one well-to-do family and has married into another, but she suffers from crippling social anxiety. She struggles to function in society and so has withdrawn to the country. While she likes Emma very much and wants to see William happy, she's keenly aware that Emma will face enormous challenges if the relationship continues. And if she, someone born to the life, has such difficulty navigating it, how will Emma fare? Will the backlash impact William, just as it has impacted Mr. Jones?

Mori never shies away from these issues. She acknowledges Victorian England's rigid class structures, the loopholes that allow people to rise through the ranks, and the reasons why some characters may wish to adhere to the status quo, all while challenging whether or not the system can be beat. It's a complex, thoughtful portrayal of a difficult situation.

She handles the individual relationships with equal care, and with gorgeous skill. Emma and William's romance blossoms largely through the art, with dialogue being secondary. So much passes between them in the form of a look, a quick movement, an outstretched hand. We truly see them fall in love. We watch their initial attraction, their growing affection, and their mutual support emerge through their body language, with plenty of backup from Mori's inventive and evocative paneling. It's always clear these two want to be together, and that each is always conscious of how their presence may help or hinder the other in any given situation.

William's parents' marriage receives equally careful treatment. While it initially seems like a separation based on dislike or incompatibility, Mori slowly reveals it to be more complex than that. They genuinely love one another, but their love is tempered by the knowledge that their marriage has taken a terrible tole on Auralia's mental health. It's easy to infer that the dour-seeming Mr. Jones wants to spare William from a similarly painful marriage (though social standing is also a prime motivator in his case), while Aurelia wishes to preserve Emma from the anxiety she herself suffers.

Their marriage doesn't simply stand in contrast to Emma and William's romance, though. It's a nuanced relationship in its own right, elegant and sad and begging for the reader to look between the panels. I get chills just thinking of it.

Romantic relationships aren't Mori's sole focus. William, like any wealthy young Victorian gentleman, has heaps of siblings. Each is their own person with their own motivations which are subject to negotiation when they're thrown together with all the rest. They care for one another, they exasperate one another, and they take sides without entirely writing one another off. I love them very much.

They're par for the course so far as the secondary characters are concerned. Emma's fellow maids receive equally detailed treatment. One gets the sense that Mori knows exactly who they are, both on their own terms and in relation to those around them. The same is true of every other character we meet, no matter how small a role they play in the larger story.

In fact, I believe volumes eight through ten are all about the secondary characters. I hope I'll have the opportunity to read those books one of these days.

On the whole, EMMA is a gorgeous romance imbued with both hope and realism. The lovers face enormous challenges as they struggle to be together, and to decide if being together is the right thing for both of them. People will get hurt, no matter what happens, and many of them suffer even throughout this early courtship. The text never condones what William does to Eleanor, his father-imposed fiance, or shies away from the social impact of a class-straddling romance. It's equally clear that William's wonderful, maddening family may in fact eject him if he continues the connection, and that threat is nothing to sneeze at.

But even in the face of these obstacles, the text encourages Emma and William to try. To search for loopholes; to learn from the past; to acknowledge and accept the sacrifices they may need to make, and to weigh the gains against them.

It's wonderful, wonderful stuff. I highly recommend it to anyone in search of a good historical romance.

While I always advocate your local library as the absolute best source for books, I recognize this may not be an option for everyone where every book is concerned. If you're in search of another way to read EMMA, you can try: