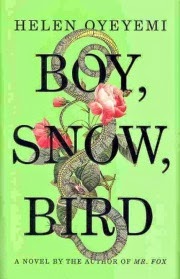 Late in 1953, Boy Novak flees her abusive father for the comfort and beauty of Flax Hill, Massachusetts, a town of artists. Unused to family life but eager for it all the same, she marries Arturo Whitman, a widowed jeweler who comes complete with parents, siblings, and the main prize--a beautiful little daughter named Snow. Boy craves a daughter just as ardently as Snow craves a mother, but their relationship sours when Boy gives birth to brown-skinned Bird, who proves the Whitmans have spent the last few decades passing as white.

I was desperately in love with BOY, SNOW, BIRD by page fifteen.

If you've known me for any length of time, you'll recall how rarely that happens. I'm a suspicious reader. I withhold my love for as long as possible lest the book in question prove unworthy of it. It's a bitter thing, falling in love with a book that turns on you. The sense of betrayal runs so deep that I, for one, find it impossible to shake off even years after1. It never goes away. It never really gets better.

BOY, SNOW, BIRD immediately reminded me of another book I loved just as intensely, and continue to love without regret: THE SECRET HISTORY by Donna Tartt. It's not that the two are anything alike, except insofar as they're about young people who lust after something outside their everyday experience--a common plot indeed. It's that they smell the same. They have the same underlying bouquet of competence and complexity and ultimate tragedy.

I loved the book all the more because I was sure Boy would know exactly what I meant if I said this to her.

Boy comes from an abusive home. Her father beats her on a regular basis. He ties her up and threatens to let rats chew her face off. This frightening legacy shapes her entire character and makes it difficult for her to commit to anyone. She drives friends away. She loves a man she makes no effort to be with. She claims not to love the man she marries, though she'll admit to a certain depth of feeling there, and perhaps an eventual transition to something else. She craves connection but has difficulty establishing it. The people she likes most are often abrasive, if not outright unkind to her.

Boy isn't any one thing. She changes from moment to moment and she is never less than entirely believable.

Oyeyemi is very much concerned with examining and evaluating perception. Mirrors play a large role from the first line on, a metaphor for the ways we see ourselves and the ways others see us.

Anything can be a mirror, from the polished edge of a picture frame to the gleaming scales of a snake bracelet.

Boy is beautiful. She takes steps to remain so, whether it's by lightening her hair (lightness, particularly of skin but also of hair, comes up over and over again) or by running from the father who threatens to maim her. Her beauty is a shield of sorts, protecting her not so much from cruelty as from the fear that she herself will be called out for her actions. Time and again, she behaves deplorably to those around her, but they forgive her. They let her back in. Though it's difficult to say for sure from our vantage point inside her own head, they might even love her.

Even the reader is inclined to forgive many of her less admirable actions, because Boy's soul is forever on display. It's flawed, and it's damaged from the abuse she's endured, but it's no less beautiful for it. Suspicious reader that I am, there were times when I forgot to distrust Boy. Times when I accepted her words at face value, only to ask myself later if I wasn't putting too much stock in what she said.

At first, it's easy to dismiss this observation as part of Boy's biased perspective. She's jealous of Snow, less for herself than on Bird's behalf; she distrusts how her stepdaughter can pass for white while her biodaughter cannot. As we move into Bird's point of view, though, it becomes clear that Snow isn't as perfect and wonderful as everyone thinks. She's by no means a depraved soul, inclined towards cruelty, but she's also inclined to accept what she hasn't earned and to consider it her due. Her kindness carries an undercurrent, as though it's a gift she bestows to those less fortunate than herself. It's a means to an end, just as her beauty is.

At the same time, Snow fights to be perceived on her own terms. She styles her hair to make her ethnicity more apparent to a casual viewer. She doesn't deny who she is, even when it costs her. She makes every facet of her appearance into a declaration and claim of power. She turns others' perceptions of her into something she wields with true force.

Bird is beautiful. Young, but beautiful. Like Snow, she controls her looks, refusing to wear her hair long or avoid the sun lest she darken her skin. Despite her youth, she's keenly aware of how others see her; of the visual difference between herself and her light-skinned family, and the effect her arrival had on them all.

Bird doesn't always show up in mirrors. She keeps this mostly to herself, even once she learns the same is true of Snow.

The ways these three women perceive themselves and each other form the backbone of BOY, SNOW, BIRD. As well they should.

Oyeyemi couches this examination of perception and privilege in the most gorgeous prose one could possibly wish for. There were a thousand passages I wished I could underline; a thousand glimmering pieces of thought I am forever grateful to Oyeyemi for capturing and putting into words. Her writing swoops through the clouds, skims across the ground, and comes to rest in tall trees before it begins the process anew, never in quite the same way.

I want to pick something to quote, but I can't choose. I'd have to go with pretty well the whole book.

Because endings mean everything, and sometimes the most wonderful books stab you in the gut right at the closer.

BOY, SNOW, BIRD made me view its desperate, flawed, beautiful characters as real people. It made me thrill to its gorgeous prose. It made me love it with the sort of desperate intensity I rarely feel for fiction and am forever searching for.

It was a 5-star book, and that's a rarity in my world. I loathe the Goodreads notion of 5 stars; how they encourage you to apply it to any book you love. To my mind, a 5-star book is something special. It comes along at rare, irregular intervals and destroys your life. Then it reforms you into something rich, strange, and different.

It doesn't feed you a load of transphobic crap in the last twenty pages.

Spoilers from hereon out, though the ending comes more or less out of nowhere and so has little effect on the rest of the book.

So Boy, she runs away from her abusive father and spends the next fifteen years avoiding him. She makes no move to learn who her mother is because she figures the lady abandoned her and that's that. There's no point in trying for anything more there.

It's easy to see reflections of her relationship with Snow in all this. That part of it is great.

But, right near the end, Boy's best friend (who is a journalist) decides to investigate Boy's origins and maybe get herself a good story out of it. And what she discovers is that Boy's father was assigned female gender at birth. He began living as a man after he was raped and became pregnant with Boy.

Boy, in response, rounds up the whole gang--her best friend, her daughter, and her stepdaughter--and heads off to search for a "spell" to make her "mother" realize it's all right to be a woman. Because obviously her "mother" is horribly ill and needs help.

Then the book ends.

The rage follows close on its heels.

The world being what it is, I suppose I shouldn't be surprised that no one involved with BOY, SNOW, BIRD said, "Hey, that's really fucking transphobic and you should not do it." But here I am, surprised and disappointed.

I loved this book. It gave me a strong desire to scour the library for everything Helen Oyeyemi has ever written (barring WHITE IS FOR WITCHING, which I've already read). And not only did it betray me, but it stole the hope of more from the same author.

Helen Oyeyemi is clearly an intelligent, articulate person and a hell of a writer, but she thought it was appropriate to end a book on perception and identity with the characters going on a quest to convince a trans man that he is not, in fact, a man2. I could maybe forgive that if the book had come out in 1968, when few people knew any better, but I presume it was written in 2013.

Yeah. No. I'm gonna need some time before I decide whether I can read any more of Oyeyemi's books.

I'm still giving it four stars because the bulk of the book is amazing, but that ending all but killed my love for it.

While I always advocate your local library as the absolute best source for books, especially divisive ones like BOY, SNOW, BIRD, I recognize this may not be an option for everyone where every book is concerned. If you're in search of another way to read this one, you can try: