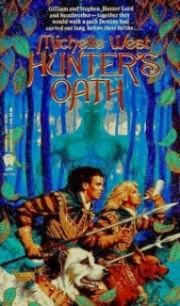 The Breodani have a unique relationship with their God. He ensures their crops will always flourish and grants the Lords of the land extraordinary abilities in the hunt. In exchange, they must gather once per year so he may hunt them.

Stephen is huntbrother to Gilliam, Lord Elseth. He assists his brother in the Hunt and keeps him grounded the rest of the time--an involved job, given that the Hunter Lords’ connection to their God leaves them unsuited for most practical affairs. Stephen’s task grows considerably more difficult when Evayne, a mysterious woman who lives her life out of order, entangles him in a series of machinations that could well destroy the Breodani way of life, if not the entire world.

Summary that fails to capture the book's awesomeness: complete. Now it's background time.

Shortly before I turned fifteen, a family friend with bookstore connections gave me a large bag of slightly imperfect paperbacks. This gift effectively marked the end of my life sans TBR pile.

It was also how I discovered Michelle West as the bag contained copies of both HUNTER’S OATH and its sequel, HUNTER’S DEATH.

I read them. I loved them. And for whatever reason, I never delved much deeper into what has become an extensive backlist with strong ties to these two volumes.

The books did stay with me, though, less for their story than for the fact that West is a Canadian who often says interesting things about other peoples’ books in the pages of THE MAGAZINE OF FANTASY AND SCIENCE FICTION. I endeavor to read more work by Canadians, as a general rule, so I figured I should revisit West. I repurchased the books, let them sit on my shelf for upwards of six years, and finally reread them on a whim back in January.

I shouldn't have waited so long. HUNTER'S OATH was frickin' awesome.

Even though I loved the book when I was fifteen, I wasn’t prepared for the way it hit me now, half a lifetime later. I have a new project for 2014: I will purchase (or borrow) and read everything Michelle West has ever written under this or any other pseudonym, because I need more.

Ain’t in great when that happens?

And yeah, okay, I know the summary I schlepped together above is seriously lacking in the "YOU MUST READ THIS RIGHT NOW BECAUSE AWESOME THINGS HAPPEN" department. That’s because HUNTER’S OATH is one of those glorious books that is so much more than its basic plot. Some wonderful things happen. Some rather dull things happen, too. The magic lies in how West brings it all together; how she structures her world, and how she forges the connections between her characters.

Time and again, she reminded me of what secondary world fantasy can be, and of why I love it so very much.

I loved this particular story so much that I’ve struggled to put my affection into words, but let’s give it a shot anyways.

Because this, right here? Is painfully gorgeous worldbuilding. Each element slots perfectly in amongst all the others to create something that never feels less than fully realized. West maintains complete control over her world's rules, allowing the setting to influence the action in organic yet still surprising ways. The setting is almost a character in itself; a subtle, supportive one that makes everyone else look frickin’ awesome while they’re on stage. I ate it up.

Breodanir is oddly compelling, too, in that it’s a visibly pseudo-medieval place that ignores many aspects of the standard medievalesque setup. In Breodanir, women hold the bulk of the political power for obvious, in-world reasons: the noblemen can’t concentrate long enough to get anything done. This simple shift from what defenders of "historically accurate" inequality would have you believe is the norm proves it's entirely possible to structure a traditional fantasy world in such a way that women get their fair share of the action.

The story also hints at (but alas, never confirms) the presence of polyandrous relationships between Ladies, Hunter Lords, and the huntbrothers who form an emotional bridge between the two. You can probably read the relationship between Elseth, Soredon and Norn as your standard wife-husband-brother-in-law thing, but I chose to look at them as a polyandrous marriage. The door stands wide open if you'd like to do the same.

West also does some interesting things with the religious side of her worldbuilding. The gods maintain a frequent, quantifiable presence in this world, and often parent half-human children with extraordinary gifts. The Hunter God seems to fit perfectly into this setup--except no one outside of Breodanir, including the other gods, can see the slightest evidence that he exists.

The Hunter God's dubious origins are far from the story's only hook. HUNTER’S OATH is the sort of wide-ranging, epic tale I love with all my heart when it's done well. While the core plot is fairly personal, what with its focus on Stephen, there’s tons of other stuff going on in the background. It all feels like the sort of thing that's sure to echo down through future books, too; which, if you ask me, is the absolute best thing about epic fantasy. Scope and sweep, people! It’s all about scope and sweep! As of this writing, I’ve only managed to read the first book in West’s seven-volume series set in the same world, but I’m confident there’ll be an awful lot of thematic overlap in the few thousand pages ahead of me, not to mention recurring characters who change and grow.

Now, y’all know my love of epic sweep gets me exactly nowhere if I can’t connect to the characters, so you’ll be unsurprised to learn that I loved Stephen et al. Trouble, is, though, I can't explain that love. Normally, I can wax rhapsodic about the telling details that make characters come to life, or the emotional payout of certain scenes, or even the manner in which my own interests and preoccupations form a bond between these fictional people and myself. In this case, I’ve got nothin’. It’s not that the above elements are absent; they’re present and account for, but they don't seem to exist in such abundance that they should’ve provoked as extreme a reaction as they did. Weird.

I guess what it all boils down to is that the characters just... clicked for me.

As I said above, this was a reread; however, I remembered very little about it. The basic setup stuck with me, as did Evayne’s time displacement, but for the most part I might as well have been reading something I'd once heard someone gush about. So much of it was new to me, from the plot to the characters to all but the bones of their engaging world. That made it all the better, as I’m pretty sure my fifteen-year-old self didn’t fully appreciate what West does here. For example, Evayne's role seemed confusing and unnecessary the first time around; this time, it was compelling in its own right and and an excellent setup for all the epic stuff going on in the background.

I ought to mention, now, that there were two segments that almost lost me: Evayne’s descent to acquire her rings and the showdown at the very end. In both cases, I struggled through the scenes themselves but found that they meshed together into something considerably more interesting once I looked back on them. They were a struggle, but they were worth it.

On further reflection, I’ve decided these scenes fell flat for me because they're action-oriented. I much prefer West’s take on emotion and intrigue than I do her fight scenes. During the former, I’m fully engaged and eager to read on; the latter, on the other hand, don't quite capture my interest. They aren’t enough of an issue to destroy my opinion of the book--you’ll notice I give it 4.5 stars, which is my "I loved the hell out of this" rating--but they did bump it down a notch in my estimation.

Still, I’m more than willing to drag myself through an action sequence or three for a world and characters as good as these ones. When the story is on, it’s on. HUNTER'S OATH swept me away with its gorgeous worldbuilding, its engaging characters, and its hints of wider things to come.

Like I said: I’m so totally going to read all Michelle West’s books this year. (And Michelle Sagara's, too; she writes under three pseudonyms that I know of.) My library list is full of her Chronicles of Elantra, I purchased her Sundering series during a recent Kobo sale, and I’m on the hunt for her Sun Sword books (which my library doesn’t own). I’ve begun recommending her to every fantasy fan I know, too, since a love this intense has gotta be shared.

I anticipate much awesomeness in the coming months.

While I always advocate your local library as the absolute best source for books, I recognize this may not be an option for everyone where every book is concerned. If you're in search of another way to read HUNTER'S OATH, you can try: